ACT Testing Tip: How to Identify Main and Subordinate Clauses 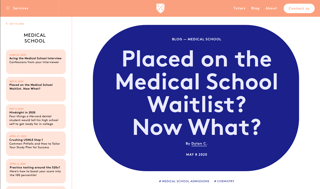 It is essential for the ACT English exam that you can identify and, if necessary, fix problems with main and subordinate clauses. Why? Because many grammar and punctuation rules require you to know what your main subject and main verb are.

What are Main Clauses and Subordinate Clauses?

A main clause is one that can stand on its own as a complete thought. It has a main subject and a main verb.

Here are some examples of main clauses:

He did not want to know the content of the letter.

Ashley often thought about her grandparents.

Here are some examples of subordinate clauses:

Although I only started last week

That Dave had been late to school

How Will These Issues Show up on the ACT?

There are two types of questions for which you will need to be able to identify main and subordinate clauses: complete sentences and punctuation.

All sentences need to have a main subject and verb. Sometimes, sentences on the ACT lack either a subject or a verb, and you will need to correct the sentence accordingly. Take this sample sentence:

Because she was already late, ran into the store.

We need to add a subject to the second clause, so that it can become a main clause:

Because she was already late, Kate ran into the store.

The second question type on the ACT for which you will need this information is punctuation.

Main clauses, when connected by and/but/or, need to have a comma between them.

Main clauses, which are not connected by and/but/or, either need to have both a period and a capital letter or a semicolon (:).

If there are not two main clauses, then they cannot be connected with any of the three combinations above. Let’s slightly reword the example above:

The phrase “especially did not want to go with them” does not have a subject and cannot stand on its own. Therefore, we cannot place a comma before the “and.” Likewise, a semicolon, which only connects two full sentences, would be inappropriate. Therefore, we need no punctuation in the sentence above, apart from a period at the end of the sentence.

How Will They Try to Make This Hard on the Exam?

Once you practice it, the concept of finding subjects and verbs will come like second nature to you. The way the test typically tricks test-takers in the section is with really long sentences. Look at the following:

After a fantastic concert, a collection of both orchestra members, who had played from the pit, and choir members, who had sung onstage, cheered their accomplishments backstage and then went out to dinner to celebrate.

Even though this sentence is long, we can use the same technique to see what punctuation is needed in this sentence. First, let’s eliminate all of the words in prepositional phrases or in subordinate clauses.

After a fantastic concert, a collection of orchestra members, who had played from the pit, and of choir members, who had sung onstage, cheered the success backstage and then went out to dinner to celebrate.

Now there is a much easier sentence:

A collection cheered the success backstage and then went out to celebrate.

The subject is “collection,” which is the subject of the verbs “cheered” and “went.” There is no subject after the “and,” meaning that there are not two complete sentences. Therefore, these clauses can be connected by “and” without a comma. The sentence is correct as written.

For more help on ACT prep, check out other next blog posts or contact Cambridge Coaching for practice problems, explanations of grammar on the exam, and one-on-one coaching!

Are you interested in reading more on ACT studying tips & tricks?

The ACT Tutor: ACT Math vs SAT Math--What's the Difference?

The ACT Tutor: Everything You Need to Know About the ACT