Preliminary used Class 8 volumes (same dealer sales) dropped 10% month-over-month in October, but are 10% higher year-to-date compared to the first ten months of 2019, according to the latest preliminary release of the State of the Industry: U.S. Classes 3-8 Used Trucks published by ACT Research. Compared to October of 2019, volumes are down 12%.

Other data released in ACT’s preliminary report included month-over-month comparisons for October 2020, which showed that average prices increased 4%, while average miles rose 1% and average age gained 2%, compared to September. Year-to-date, average price, miles, and age were all lower, down 11%, 3%, and 7%, respectively, compared to the first ten months of 2019.

ACT’s Classes 3-8 Used Truck Report provides data on the average selling price, miles, and age based on a sample of industry data. In addition, the report provides the average selling price for top-selling Class 8 models for each of the major truck OEMs – Freightliner (Daimler); Kenworth and Peterbilt (Paccar); International (Navistar); and Volvo and Mack (Volvo). This report is utilized by those throughout the industry, including commercial vehicle dealers to gain a better understanding of the used truck market, especially as it relates to changes in near-term performance.

According to Steve Tam, Vice President at ACT Research, “How the year ultimately plays out will depend heavily on the demand for equipment, particularly in the spot freight markets, where rates have yet to show any signs of abating from recent record highs.” He continued, “That said, one of the most frequent questions we are being asked today is why truckers are buying trucks when there are still tens of thousands of unemployed truck drivers, whose rigs are sitting idle.” 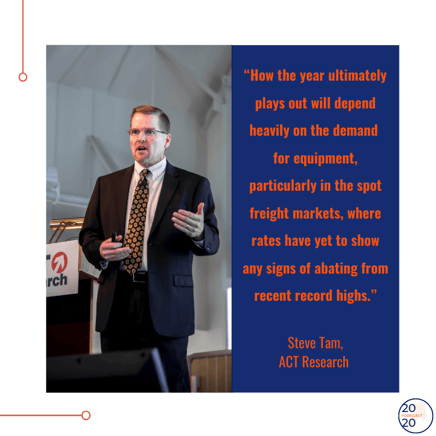 Tam added, “While seemingly illogical at a macro level, each buyer likely has his or her own reasons for buying and is probably not looking at the big picture of balancing work and capacity.” He concluded, “Buyers are probably unaware that they are individually contributing to a faster imbalance of too many trucks and not enough freight, which will hasten the next peak and send the industry down the backslope of the next cycle.”

ACT Research is recognized as the leading publisher of commercial vehicle truck, trailer, and bus industry data, market analysis and forecasts for the North America and China markets. ACT’s analytical services are used by all major North American truck and trailer manufacturers and their suppliers, as well as banking and investment companies. ACT Research is a contributor to the Blue Chip Economic Indicators and a member of the Wall Street Journal Economic Forecast Panel. ACT Research executives have received peer recognition, including election to the Board of Directors of the National Association for Business Economics, appointment as Consulting Economist to the National Private Truck Council, and the Lawrence R. Klein Award for Blue Chip Economic Indicators’ Most Accurate Economic Forecast over a four-year period. ACT Research senior staff members have earned accolades including Chicago Federal Reserve Automotive Outlook Symposium Best Overall Forecast, Wall Street Journal Top Economic Outlook, and USA Today Top 10 Economic Forecasters. More information can be found at www.actresearch.net.

ACT’s 64th Seminar is scheduled for February 23-25, 2021. Focused on the continuous evolution and advancement of power and energy changes in the transportation and commercial vehicle markets, OUTLOOK Seminar 64 will feature key industry leaders such as Ryan Reed of Wabash National, John Bennett from Meritor, Lance Riegel of Marvin Johnson, and Dominick Beckman from Hino Motors. Look for more details on this event over the coming months and save the date for February’s event. Click here for seminar information.

Access information about other ACT Research products and services.

We're the leading publisher of industry data, market analysis, and economic forecasting services for the commercial vehicle and transportation industries.

Partner to LMC Automotive and the Chinese State Information Center